[excerpt from a speech given August 22, 2012 in San Francisco, California]

It is all very well and nice to advocate changes for the world, to tell other people what to do, to clamour for change, to rage against the machine, but the idea that really got under my skin was this thing, this Gandhi thing, that we have to “be the change we wish to see in the world.” 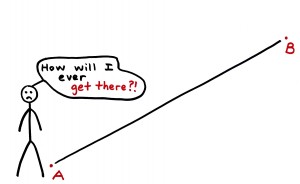 Ugh, what could be more difficult, than changing oneself? It’s so easy to tell other people how to change, but for anyone who has tried to quit smoking or to take up jogging or to lose weight, it just seems like such a monumental effort to break away from habits and behaviours that we have been steeped in for many years. We know we need to change things in our personal lives, that there is always room for improvement, but to actually become all that we know we can really be is just so hard. …

But I believe it does not have to be as difficult as it seems. Certainly the struggles that many of us have in our lives are not nearly as awful or difficult as the ones experienced by lots and lots of other people around the world. But still, life is hard, and there are times, like when you get that horrible, horrible phone call, it can really suck…

And that’s okay. In fact, I think it is meant to be that way. For all the frustrations and problems and badness that we experience, through it all, we can choose to think of the story of our lives as being centered around the theme that we are here to learn. Every challenge, every frustration that we encounter holds some kind of opportunity to learn, and we must seize those opportunities however and whenever we can — whilst maintaining a “life,” of course.

The investment we put into our own continual self-improvement is critical for all of this to work. If we are to save the world, we must first save ourselves, much like how on airplanes we are told to put the oxygen mask on ourselves first, before helping the child or elderly person next to us. I recommend a process of continuing to drive to the core of ourselves, chipping away at all the layers of fear, guilt, bad habits, emotional scar tissue, to get at who we really are, so that we can do our thing. 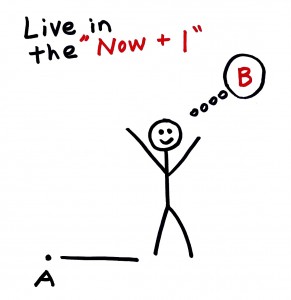 It seems tedious and time-consuming perhaps, but I further recommend a little short-cut, to make it easier, called the Power of Now Plus One. I think that in our lives, when we look at where we are, and then we think about where we should be, the distance between the two can seem overwhelming. Scrap that thinking, and choose to live in the Now Plus One. Using the massive power of your mind, visualize who you truly are, at your core, and be that person by bringing your moment-by-moment behaviours and decisions into line with who that person really is. It is a little bit like bringing accountability to the idea that we should “fake it until we make it” — be who you are, and then every day, all the time, commit to behaving that way. As Jim Rohn said, “Affirmation without discipline is the beginning of delusion.”

The Now Plus One idea is that we don’t just live in the now, but live one tiny little nano-second from now, where the possibility exists that you aren’t just being who you feel to be right now, but you are being your new and improved future self, closer to your core, more self-actualized that you were in the past.

I feel that there is a much, much shorter distance between ourselves and the future when you realize you can just go there now. I think that I am, therefore I become, therefore I am. …